Sometimes we have periods of time where things feel like they’re going well, and then there are times when everything feels like it’s piling on you like an avalanche. This week has felt a bit like the latter.

We had new neighbors move in downstairs on Friday. They had all the windows open and the front door open on a very windy evening, and the wind kept slamming the door shut violently, which shook the entire building. After the 5th or 6th SLAM I went downstairs and opened my door. I politely asked the man (and with some trepidation, as we have another neighbor who drinks too much and slams doors while screaming loudly occasionally) what was going on with the slamming? He introduced himself to me and said he was moving in and seemed confused as to why I seemed to care. I watched the wind try to close the door again and made a comment about how it was the wind making the door slam (as an older man used  a towel to prop it open) and went back upstairs, but now whenever I see him he looks at me like I’m a giant asshole. So now there’s tension with the new neighbor because I didn’t want my entire apartment to shake while I was trying to relax after work.

Monday was an incredibly emotional day for me, due to digging up some deep rooted emotional issues I’d long thought taken care of. They do that, you know. Like an old, uncomfortable pair of shoes you think you’ve tossed in the dumpster but you find, years later, stuck in the sliding mechanism of the guest room bureau. They turn up and throw a stick in your spokes.

Wednesday my dog Bingley, my baby boy, my heart, my soul, fell ill suddenly. He was lethargic and refused all food. He just slept all day and when I took him out for a walk he was stiff and slow. He had a fever, and the shakes. I decided to see how he was in the morning. This morning we took him to the vet because he was still feverish and shaky. They gave him a pain injection, antibiotics, pepcid and subcutaneous fluids and tested him for Lyme. He’s much better but my wallet is much lighter. I hope he continues to improve. I don’t know what I’d do without my baby boy.

When I arrived home today I received two letters in the mail. One, my doctor’s office announcing my doctor’s retirement. I’ve had the same, incredible, amazing doctor longer than I’ve been married. It’s safe to say that I love him like an uncle. And now I have to try to find a doctor that I trust as much as I trust him.

The second letter was from my apartment complex. The letter states that I’m in violation of my lease for not having renters’ insurance. I’ve had continuous renters’ insurance since I moved in, EIGHT YEARS AGO. The letter states that if I do not comply they may evict me.  I was THREATENED WITH EVICTION for not giving them a copy of a piece of paper. Can we not be civil in this day and age? This is the very first notice I’ve received for this ‘violation’ and it threatens eviction? Even though it’s a form letter, it’s ridiculous.

I’m tired, people. I try so hard to be considerate of others, so it’s extra hard when people seem ignorant of my feelings. All I want is a place to live where I feel safe and I can relax. It feels like so much to ask these days – to have peace and feel respected.

If I hadn’t started meditating regularly first thing in the morning I’d be in tears right now.

Be kind to others, okay? Life’s too short to be an asshole. 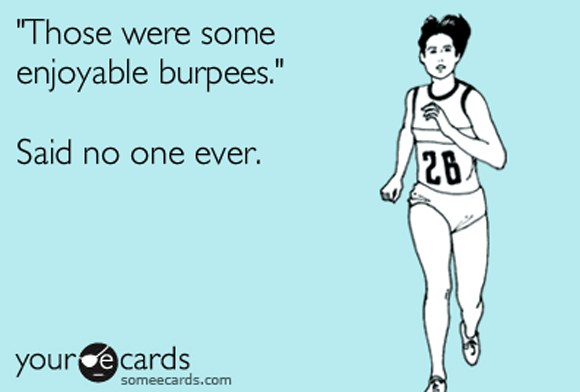 I’m a pretty open-minded person. I like to try all sorts of workout routines and moves, and I’m willing to try almost anything once if it has to do with fitness. There are a few things in the fitness realm that I’ve discovered I just do not like. I wouldn’t go so far as to say I hate them (I can’t think of a single thing I actually hate) but there are a choice few I vastly prefer not to engage in. Here’s the short list:

Treadmill aka THE DREADMILL

I enjoy running outside, but there’s something about the treadmill that always makes me feel as if I’m a nanosecond away from falling and breaking my face. It feels unstable. How did we take something that feels so natural and make it feel so… awkward? I’m awkward on stable ground as it is. (Seriously, ask my husband, I’m prone to randomly walking into corners of walls and table edges.)

There really isn’t a reason that the elliptical sucks for me except that it makes my knees feel funny and I feel unnatural doing it. Also, like the treadmill, it’s BORING. I despise anything I have to do for an extended period with minimal change of view. Major snoozefest, man. Unless they face the weight room… 😉

Burpees are pretty much the worst thing ever. I have occasional orthostatic hypotension, so the act of being down on the ground and standing up quickly makes me feel like I’m either going to vomit or pass out, which is never fun. Cross Fitters swear by them, and I’m sure they provide excellent calorie burn, but I am SO not a fan. You can keep your burpees.

I also am not a fan of any exercise that puts a ton of pressure on my wrists. Now the lady in this video is fantastically fit, and I’m sure she knows what she’s talking about, but I’d rather do something much more fun, like kettlebells. Plus, I can pretty much guarantee you that you will never have a body like hers without lifting weights, so don’t let the mountain climbers deceive you. (Or maybe I’m just bitter.)

What are your least favorite exercises?

You heard me! I’m gonna write about things I DON’T like! Everyone writes about things they love, right?! Well damn it, I’m gonna be different. It’s Memorial Day weekend and (as usual) the Hubs and I are working. That honestly doesn’t bother me, because Memorial Day was never a huge holiday for me growing up and the Hubs is Canadian. So there. But there are several things I have always disliked about summer holidays (they all seem the same sometimes, don’t they) and I will list them here:

I live in southern New Jersey about 15 minutes east of Philadelphia, so more than an hour from the ocean. New Jerseyans lovingly call the beach areas “the shore”, and we’ve got some of the best in the country. People come from other COUNTRIES to roast themselves on our white sand beaches. It’s flippin’ NICE here, haters! Even so, I’m very glad I don’t work in Philadelphia, because it’d probably be faster to walk than to drive home with all the shore traffic.

You can have mine, thanks. Mayonnaise on cold starches in 90 degree heat? (Okay, to be fair, I won’t eat macaroni salad, potato salad or coleslaw pretty much ever. Not a fan.) Is there a quicker route to a sour stomach than these foods? Plus not terribly healthy, are they? Now if you look at my Instagram you will see I made a potato salad just the other day. A WARM potato salad dressed in BALSAMIC and MUSTARD. But cold potatoes? Keep em! And don’t even ASK if I would like some cole slaw. I don’t. But thanks anyway.

I’m not talking about amazingly beautiful fireworks displays. I have incredibly fond memories of lying in the back of a Datsun Z with another kid while my dad and his girlfriend sat in the only two seats of the car as we watched a stunning fireworks display perfectly timed to the 1812 Overture. I’m talking about those little crappy firecrackers that aren’t pretty but everyone loves because they’re illegal and make loud noises. Firecrackers keep me from falling asleep and scare the crap out of my dog. They cause people to blow off fingers and cause house fires.

I’m not trying to diminish the importance of any of the summer holidays (Memorial Day, Independence Day, Labor Day), trust me. These are important holidays for a lot of Americans. I’d just like to get back to the heart of the matter here, and maybe ask that we skip the mayo.

Have a safe and happy Memorial Day!