In my Flavor Primer series, I’m going to give a brief introduction of various herbs, spices and condiments and provide links to recipes to help you broaden your flavor horizons.

Everyone’s heard of bay leaves, right? But how many of you use them in anything other than soups? Do you even know why almost every soup uses bay leaves? Do you usually skip throwing that crunchy little leaf into your slow cooked foods because you just can’t be bothered? Well, you shouldn’t, and I’m going to tell you why.

Most people use bay leaves as a flavor enhancer in a slowly cooked soup or stew. You grab a flat, crunchy leaf that’s usually partially broken and just toss it in, then either fish it out later, or, if you’re me, you just warn people it’s in there and let them find it themselves.

When a whole bay leaf is thrown into a simmering pot of soups and stews it imparts a subtle flavor and aroma of camphor and eucalyptus, and is similar to oregano and thyme. There is a sharp and bitter back note that helps round out other flavors. In short,  bay leaves help balance other flavors and adds a little something that we can’t quite put our fingers on, but notice if it isn’t there. Have you ever cooked something without salt and discovered it tastes flat? Bay leaf works like that. I always remember to use a bay leaf when I make soups and stews.

BUT… my eyes were opened to the wonders of ground bay leaf by my Portuguese former in-laws.

Let me start at the beginning.

Bay laurel (Laurus nobilis, Lauraceae). Fresh or dried bay leaves are used in cooking for their distinctive flavor and fragrance. The leaves are often used to flavor soups, stews, braises and pâtés in Mediterranean cuisine. The fresh leaves are very mild and do not develop their full flavor until several weeks after picking and drying.

If eaten whole, bay leaves are pungent and have a sharp, bitter taste. As with many spices and flavorings, the fragrance of the bay leaf is more noticeable than its taste. When dried, the fragrance is herbal, slightly floral, and somewhat similar to oregano and thyme. Myrcene, which is a component of many essential oils used in perfumery, can be extracted from the bay leaf. They also contain the essential oil eugenol.

Many different cuisines use bay leaves. Bay leaves were used for flavoring by the ancient Greeks. It is a fixture in the cooking of many European cuisines (particularly those of the Mediterranean), as well as in the Americas. They are used in soups, stews, meat, seafood, vegetable dishes, and sauces. The leaves also flavor many classic French dishes. The leaves are most often used whole (sometimes in a bouquet garni) and removed before serving (they can be abrasive in the digestive tract). Thai cuisine employs bay leaf (Thai name bai kra wan) in a few Arab-influenced dishes, notably massaman curry. In Indian and Pakistani cuisine, bay laurel leaves are sometimes used in place of Indian bay leaf, although they have a different flavor. They are most often used in rice dishes like biryani and as an ingredient in garam masala. Bay (laurel) leaves are frequently packaged as tejpatta (the Hindi term for Indian bay leaf), creating confusion between the two herbs. In the Philippines, dried bay laurel leaves are added as a spice in the Filipino dish Adobo.

Bay is a spice that has been cultivated since recorded history. The bay tree, or bay laurel, is indigenous to Asia, and spread through the Mediterranean, where it was called laurel. Here it became a symbol of honor and glory in the form of laurel wreaths, and even the Honorific “Poet Laureate” reference this humble herb. The leaves grow on a shrub-like tree and are elongated ovals that end in a slender point.

Until I met my former husband, I was like most people: I had never used bay for anything other than tossing into soups or stews. But then I was introduced to a mouthwatering Portuguese dish called Frango Grelhado. Frango Grelhado means nothing more than “grilled chicken” in English, so the recipe itself isn’t particularly specific. But the version I make includes crushed bay leaves, red pepper flakes, black pepper, paprika, salt, fresh garlic and olive oil. All you do is toss those ingredients in with bone-in skin-on chicken breasts and marinate for a couple of hours, then grill or broil til it’s cooked through and the skin is crispy and slightly charred.

Directions
Crush the bay leaves in a mortar & pestle or grind them in a spice grinder.

Blend bay leaves and remaining ingredients in a bowl or a shaker jar.

You can also use bay leaves in another Portuguese dish, Espetadas!

Directions
Whisk together the red wine, garlic, bay leaves, and black pepper together in a large glass or ceramic bowl. Add the chicken cubes, and toss to evenly coat. Cover the bowl with plastic wrap and marinate in the refrigerator for 8 hours or overnight.

Preheat an outdoor grill for medium-high heat (or use your broiler), and lightly oil the grate. Sprinkle chicken with salt.
Remove the chicken from the marinade; shake off excess liquid. Discard the remaining marinade. Skewer the chicken onto the prepared skewers.

Cook on the preheated grill or broil until the chicken cubes are cooked through and slightly charred.

One extra tip…my former MIL uses branches of bay leaves in her house in the Azores. They do a great job of keeping cockroaches out of the house when it’s closed up most of the year! 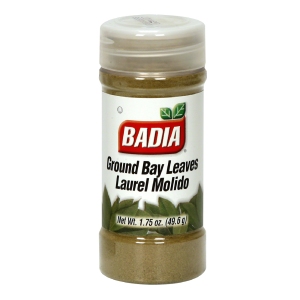 If you don’t want to go out and purchase ground bay leaves, you can process them in a coffee or spice grinder or you can crush them in a mortar and pestle. This will ensure a much stronger flavor than pre-ground bay.

In my search for unique recipes that use bay, I found Home Ec 101 suggests baking potatoes with a bay leave between the halves and adding a bay leaf to the water when boiling potatoes for mashed potatoes, both of which I’m totally going to try!

Do you use bay leaves regularly or have you eschewed them? If you aren’t using them, maybe you should!