THIS WEEK YOU GUYS. What a total cluster. What a sh*t sandwich. Okay, more like a delicious hummus BLT between two slices of sh*t bread. Read on and find out why. Also, at the end there’s a theory as to why it was so awful.

This day was really fun! Started the day weighing in at 169.2. I had the Protein Porridge for breakfast, and let me tell you, that will be a staple in my house from now on! Instead of going to my usual walking group I went to a Bingo charity event that supports our local food banks. I had my normal breakfast and a snack (a hard boiled egg and a minneola orange), but then the problems began. Lunch was provided, and it was buffet style. I tried to take very small amounts of the pasta and fill my plate with fruit and salad, but I couldn’t resist the garlic bread or the eggplant caprese. I also grabbed a turkey wrap but took the wrap off because I just wanted the protein. 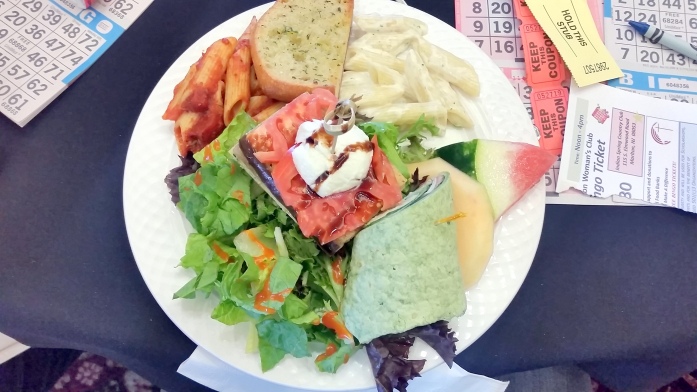 Then we played Bingo! I won a $10 gift card to WaWa as a door prize, but that’s it. But then, oh boy, it was dessert time. I conveniently didn’t take a picture of my dessert plate, but it involved a piece of almost everything chocolate. Afterwards I took Bingley to the local park to walk around and take some pics. The Pot Roast was done when I got home, so we ate. And then my evening consisted of eating almost an entire can of mixed nuts. WTF.

Monday I was back on track! Had the delicious Lasagna Egg Bake for breakfast, then headed to my dental cleaning where I got a clean bill of health! It was a gorgeous day so I did upper

body training so I could walk around outside a lot. I had a Sweet Potato Protein Brownie for a snack (mmm) before we went grocery shopping and then leftovers for lunch. In the
afternoon we took a walk down to our local WaWa to grab a beverage and get some photos of the pretty flowers on our street. Dinner was Skillet Coconut Lime Chicken with Roasted Cauli Rice. Roasting the cauliflower makes it so much tastier! Then I tried this cool new protein bar. It tasted EXACTLY like blueberries! I’m definitely buying more of these this week. No Gluten, No Soy, No Dairy, No Added Sugar and 12g of protein for 210 calories! AND DELICIOUS!!!!!  I was very hungry before bed so I finished off the grapes from the previous week but was still under on my range for the day. Success! 1842 cals.

Tuesday I also behaved myself, thank goodness! Protein Porridge for breakfast, butt and thigh workout. Leftovers for lunch of course, and an egg and orange for a snack. Today was an interesting day at work because a retired hockey player for the Philadelphia Flyers came into the store so that caused some buzz! Had a protein shake for a second snack. Dinner this night was the highlight of the week: Rajma Masala Buddha Bowl. YOU GUYS I WILL BE MAKING THIS AGAIN. So amazingly delicious.

Every time I make Rajma Masala I’m reminded how much I love it, and pair it with bulgur and roasted sweet potatoes and it’s divine. I was hungry again this day so I ate a Sweet Potato Brownie and a half serving of dark chocolate (chocolate is the theme this week, can you guess why?). Stayed within range. 1969 cals.

Kettlebells with the girls this night! Lasagna egg bake for breakfast, sweet potato brownie as a snack, and I had a small apple as I was making dinner, which was Pork Egg Roll in a Bowl (SUPER FILLING but I need a bigger skillet to cook it in, haha).

Then workout time. I had a huge deficit after they left so I had a leftover piece of Sweet Potato Protein Bread for dessert. 1869 cals.

Thursday I did a split workout. So I watched the video once in the morning and once in the evening.

Breakfast was protein porridge, lunch was leftovers. Hungry AGAIN today, so I had an egg and orange for one snack and a sweet potato brownie for a second. Dinner was Roasted Broccoli and Cheddar Stuffed Sweet Potatoes with a Tossed Salad and Balsamic.

Going on my list of keepers for sure! I did the second half of my workout after dinner and then had a 100 cal bag of popcorn and a half serving of dark chocolate. 1893 cals.

Friday is when things really began to fall apart. I tried a new workout, which was very difficult but fun.

Egg Bake for breakfast after, then headed to work. I ate my brownie early, because I was genuinely hungry. Leftovers for lunch. And then… doom. I tracked everything, and it could have been worse, but it was a harbinger of what would be to come. I had a lot of snacks:

Cottage cheese with cinnamon and blueberry jam, an old favorite

(If I’d stopped here it would have been okay.)

2 oz. of mixed nuts (at least I weighed and measured these…this time)

SATURDAY WAS A DISASTER! An absolute total disaster. I woke up at 169 lbs even, which was okay, only 6/10ths of a lb higher than my lowest during this challenge. Definitely a binge day. My PMS was raging. I felt like a bruised tomato and didn’t want to interact with anyone, but I had to go to work. After leftovers for lunch I walked to the local grocery store and bought myself a piece of chocolate fudge cake. If I’d been able to stop there that would have been fine. But at home I polished off the rest of the sweet potato brownies (3) and another can of mixed nuts (WTF ANDREA YOU HAVE A PROBLEM). I was quite obviously feeling something I didn’t recognize as needing to come out so I just stuffed it back down with food. Awful. Dinner was super yummy though.

Now onto my theory: those mixed nuts have peanuts in them. Peanuts are a binge food for me. I don’t have any peanut butter in the house, or else I probably would have eaten that too. Week 4 has no peanuts, so keep your fingers crossed for me!

Week 4 has started and I WILL behave myself this week, come hell or high water! Off to walking group with my camera. Have a great Sunday!

7 Comments on “Week Three In Review”