Here in the US, Cinco de Mayo is a time for margaritas and tacos, but very few Americans actually know what Cinco de Mayo is all about. For starters, it’s not Mexican Independence Day! May 5, 1862 was the Battle of Puebla, where a substantial French Army had the crap kicked out of them by a small Mexican group led by General Ignacio Zaragoza. This win didn’t immediately result in Mexican independence, but it’s still an incredibly important national holiday, particularly in Puebla itself.

Much like St. Patty’s Day, we American’s have made this holiday an excuse to get drunk and eat what we think is traditional food. In Mexico, it’s a family holiday where traditional foods such as enchiladas, tamales and flautas are eaten. In an effort to not eat generic Tex Mex for this year’s Cinco de Mayo, I did a little research and found some great recipes. The one I just had to try was Puebla-style Chalupas (recipe here). Now if you eat at Taco Bell, you’ve probably seen chalupas on the menu there, but the authentic chalupa is a far cry from the greasy deep-fried shell stuffed with seasoned ground beef, lettuce, tomatoes, shredded cheddar cheese and a glop of sour cream. (Hey, I don’t judge, I love Taco Bell chalupas.)

The word chalupa comes from the canoe-like boats that Aztecs used in their ancient capitol Tenochtitlan, which is now Mexico City. A popular snack in the region, they can be found on nearly every street corner and in fine restaurants as well. I changed little about this recipe, except to lighten it up a bit by baking the shells with a small amount of oil brushed on each instead of the normal deep-frying method. (Deep-frying in lard is the preferred technique.) 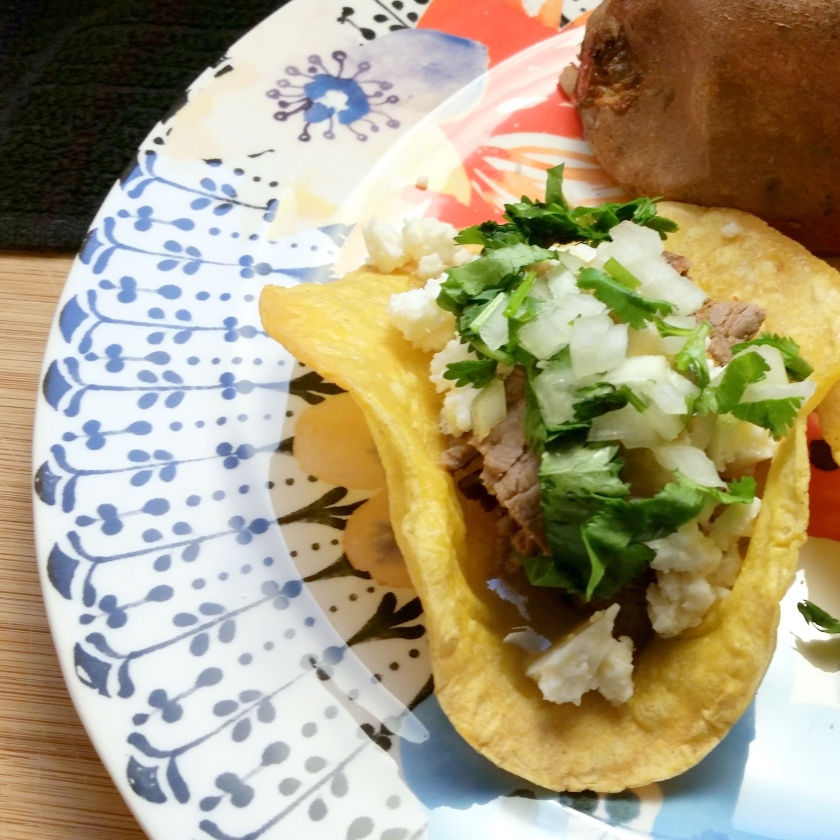 I broke tradition a bit here by serving these with a baked sweet potato, dusted with cumin, chili powder and garlic powder mixed with a smidge of salt.

So yummy and way more traditional than fajitas and margaritas! Pair it with an ice cold cerveza Mexicana for a real taste of what Cinco de Mayo is all about!

How do you celebrate Cinco de Mayo? Let me know!