Do you know about Foodimentary? It’s a blog about nothing but national food holidays with some historical food facts thrown in.

Today is National Indian Pudding Day, so of course I had to make some. I’d been meaning to for YEARS, but like many things I just never got around to it. Here are some facts about Indian pudding from Foodimentary’s entry:

It is interesting to note that the name Indian pudding does not refer to the natives but in fact is used to identify the main ingredient which is cornmeal and was earlier called Indian meal.

The Native Indian pudding is a combination of cornmeal and molasses and is often mixed with fruits like Apple and raisins before being baked. This day may not be a national holiday and you really don’t need to wait till the national pudding day to actually enjoy the sweet.

Native American Indians were a very important part of the first Thanksgiving feast ever celebrated in the Americas.

Since this tradition has been upheld from decades past it is interesting to see it approach before Thanksgiving.

The national Indian pudding Day is utilized to enjoy the savory and sweet puddings which are part of the Native American Indian cuisine.

So, my first thought about Indian Pudding was “mmm, that sounds so tasty”. Sadly, my second thought was “Are we even supposed to be calling it that anymore?” *sigh*And my third thought was “Do Native Americans even EAT this?” (The answer is no, they didn’t. Colonists brought molasses over from England and native peoples didn’t use milk in their cooking.) But I decided that arguing the semantics and etymology of the name “Indian Pudding” is for someone else’s very different blog, and I’d like to just focus on HOW FRIGGIN’ TASTY it is! 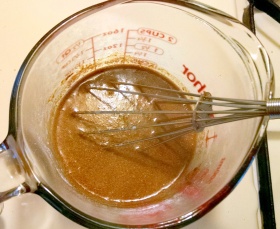 I used this recipe from Simply Recipes and cut it to 1/3 size, substituting 2% milk for the whole milk, because I just don’t buy whole milk EVER and they didn’t have a pint of whole at Shoprite, only 2% and skim. Served warm, this stuff is winter comfort in a bowl, somewhat akin to the taste of a Sweetzels Spiced Wafer. Add a smidge of heavy cream or whipped topping and a sprinkling of cinnamon to complete the warm hug that is this dish. It’s AMAZING with a scoop of vanilla ice cream.

Have you ever had Indian pudding? Will you try it?