I wish I could tell you I was back to running 5K and that the kinesio tape has fixed my foot problem, but I can’t. I’ve run twice since trying it, both times pain free, and I worked my way up to a mile, which is good. The bad news is that I hurt my back doing kettlebell windmills on Monday, so I’m off exercise until my silly back behaves! It stinks. So, instead of a foot update, you get a recipe! The ladies in walking group heard I would be making almond flour pancakes this week, and insisted I share the recipe, so here it is.

I found this recipe for almond flour pancakes online. I had purchased almond flour for a previous recipe and really wasn’t that sure what to do with it. I spent days researching recipes on Pinterest (almost all of which are desserts) and decided that breakfast for dinner would be the solution! I had all the ingredients already, but I didn’t want just every day pancakes and syrup. The cinnamon in the recipe inspired me to try a cinnamon roll flavor, so I picked up a package of cream cheese (full fat) at the store. And of course, one needs fruit with pancakes, so, strawberries!

The pancake recipe wasn’t exactly what I expected. Mine looked nothing like the original recipe’s photos. I changed nothing but ramping up the cinnamon, which of course would change the color, but my pancakes were SUPER THICK compared to the original recipe’s. The cinnamon wouldn’t have caused this, as cinnamon is hydrophobic, and thus wouldn’t have absorbed extra water. In the future I’ll TRIPLE the water. They did taste very good, but they were dense and somewhat mealy. Perhaps I could trade out two whole eggs for four egg whites, whip them, then fold them in to make them lighter and fluffier. (The original poster did recommend using club soda to fluff it up a bit.)

I warmed the cream cheese in the microwave for a minute so it would whip up a bit, and blended in a bit of sweetener and some vanilla. Lastly I sliced up some strawberries to throw on top.

Results: I was disappointed in the texture and quantity of pancakes. This recipe made only seven thick, dense pancakes. I really think adding more water/using club soda/whipping egg whites would help. The serving size felt really small. I mean, who wants to eat only two pancakes? (They were pretty filling though, despite seeming like a small amount of food.) 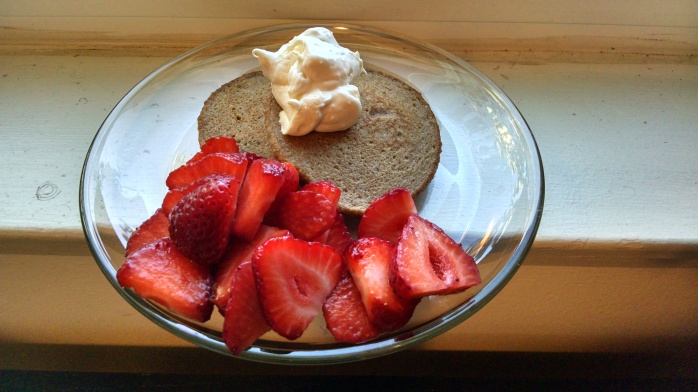 The cinnamon also wasn’t terribly pronounced, despite me using a whole tablespoon. Maybe cinnamon oil next time? I did like that neither the pancakes nor the whipped cream cheese topping were terribly sweet. The sweetness of the strawberries made it plenty sweet. Will I try this recipe again? Maybe. I very rarely make recipes again unless it’s amazingly delicious. So, who knows. To make you feel amazing despite this mediocre response, here is a photo of Bingley, glowing in the sun: 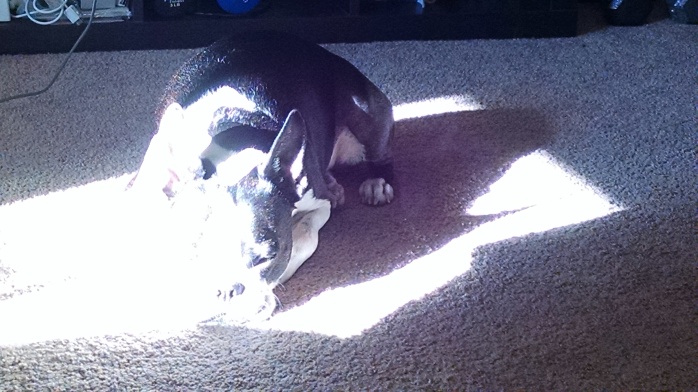 Will you try almond flour pancakes? Let me know in the comments!

What do you do with leftover chocolate covered strawberries your super sweet (and handsome) guy got you for Valentine's Day? You eat them for breakfast of course! I had mine alongside a ham, egg & cheese on 2-minute flax bread. Yum! #homemade #healthy #healthyfood #delicious #breakfast #foodblogger #foodisfuel #eatrealfood #ham #egg #cheese #breakfastsandwich #flaxmeal #chocolatecoveredstrawberries #thedayaftervalentines #romantic #bestboyfriendever
Moss. #nature #moss #closeup #photography #hiking