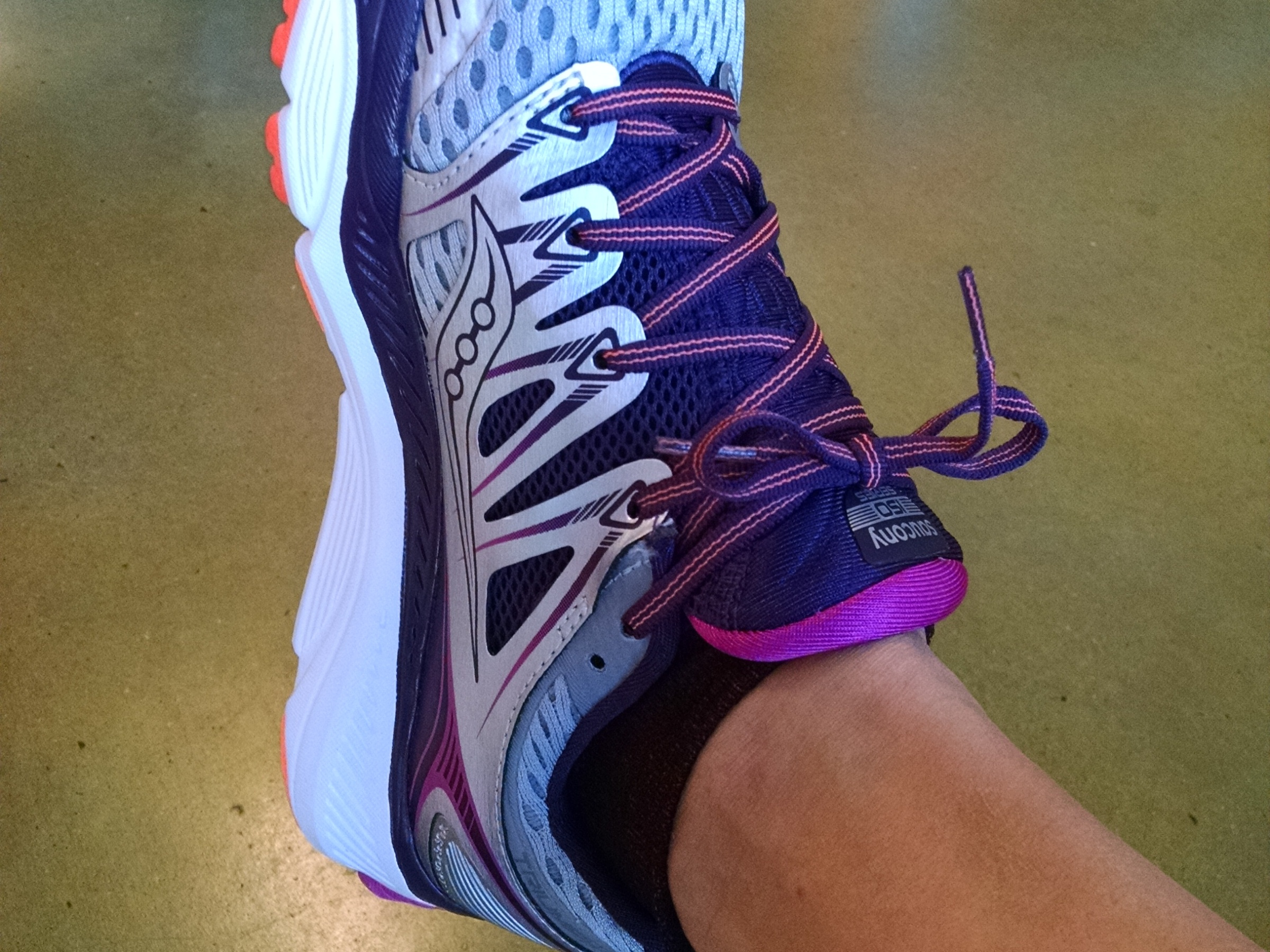 As you probably all know, this was the year I tried running. Until this year, I’d always hated it. It was hard. It made me breathe funny. DID NOT WANT.

Well, I tried it again this year, after reaching my goal weight and doing a lot of weight training. And, I actually LIKED it. I had cheap shoes and running pants I bought used at the thrift store, I made myself a running belt and got into the fluorescent clothes. I started C25K and joined the Adventure Runs with my walking group buddy Sharon. I ALMOST ran a solo 5K. Then something happened. My foot hurt. It had this weird popping sensation. I thought it might be a stress fracture (it wasn’t). I though it might be a Morton’s Neuroma (it most likely is). I stopped running to heal up, and I realized: I missed it. It’s totally not easy and it took me a while to figure out what I could and could not eat beforehand, and at times, my running buddy Josh and I dripped sweat on a 90-degree Saturday afternoon (which I mostly hated), but I missed it.

On July 25th I completed my first 5K+ when I completed the 4H Mud Run, after almost 6 weeks of not running AT ALL. We walked most of it, but we finished, damn it! And I realized my running shoes were pretty much ruined. Which was fine, because I think I probably should have thrown them away about 4 months ago, and they probably contributed to my foot problem! So, an easy discussion with The Hubs decided the matter: I was going to get fitted for a good, proper pair of running shoes. Since I had a $30 gift certificate for R-Gear at my local Road Runner Sports (creators of the Adventure Run), and since I was familiar with the store to begin with, I decided we’d go there.

Now, I was nervous. Not only am I terrible when it comes to spending money on myself, I knew it would be an elaborate process to get fitted for shoes, then decide which pair to buy, and leave without spending what felt like a small fortune. I needn’t have worried!

We arrived at my local Road Runner Sports around 2:30 and were immediately approached by an incredibly friendly employee who asked us if we were looking for anything in particular. I immediately said I was interested in getting fitted for shoes, and that it was something I’d never done before and that I was a bit nervous about it. He very kindly reassured me that it was no big deal, and that their fitting computer, called ShoeDog, would take about ten minutes to figure out what sort of shoes would best work for me. He put my name on the waiting list, which was only about a 20-minute wait, and The Hubs and I browsed while we waited.

When my name was called, a friendly woman named Linda greeted me next to a workstation complete with a treadmill, a computer with a large touchscreen monitor, and some two-padded squishy looking thing on the side. Linda quickly described to me what we would be doing, and the first step was taking off my shoes and socks. I stepped on a small footpad on the floor, where I had to stand still for 30 seconds while the computer read my pressure points. The machine popped up a display that quickly showed me that I put a lot of pressure on the outside of my left foot, and moderate on my right heel, but that I had nice, high arches. Then Linda had me step on the treadmill, still barefoot, and jog at my pace for 30 seconds while two cameras captured video of my feet hitting the belt. That was really cool, because I could actually see that my ankles have very little flexibility from side to side (which is good when you run) and that my feet bend outward towards my pinky toes just slightly, but that wasn’t much to worry about, so it was recommended that I get a neutral shoe (as opposed to a stability shoe) with a level 4 cushion in a size 9.5 (the cheap Nikes I’d been wearing are 8.5, and I think their snug fit was what contributed to my foot problem) with a B width, which is normal width. 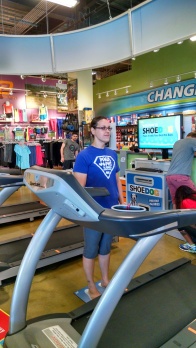 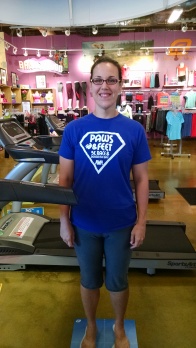 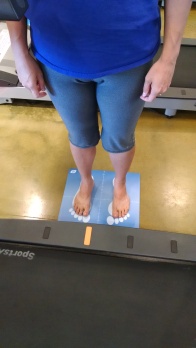 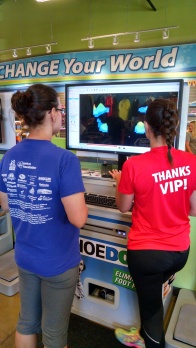 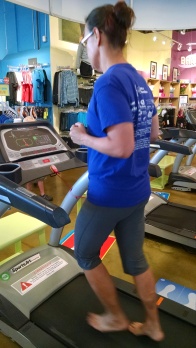 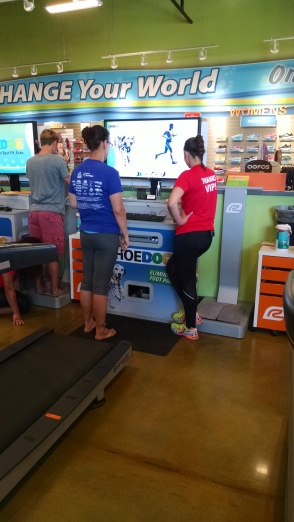 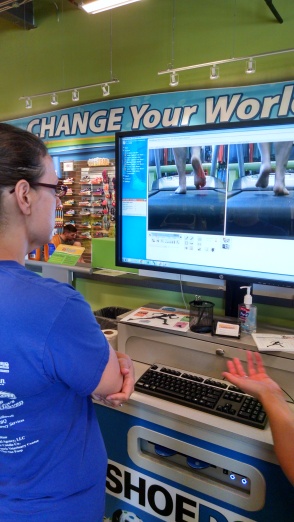 Next up was fitting me for custom insoles. Linda put two flat insoles into an oven, which warmed them to make them pliable. Then she had me step on that two-padded squishy looking thing, which turns out was to help form the insoles. One foot at a time, she had me stand up straight onto the comfortably warm insole, press with my heels, then press down onto her fingers with my toes as hard as I could. This molded the insoles to my foot, and showed us just how high my arches actually are! 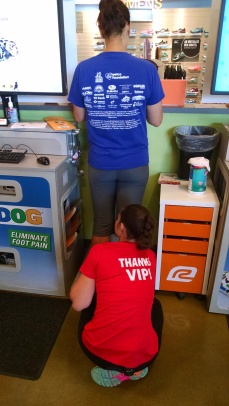 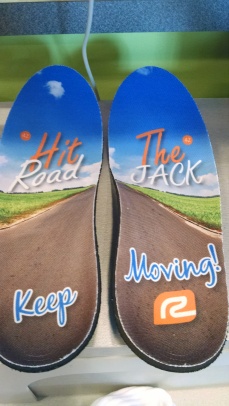 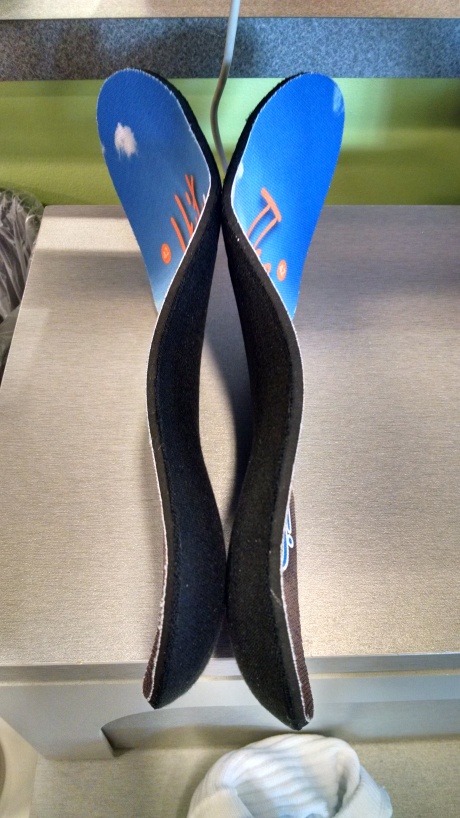 I had to fill in my information on the touchscreen, and then Linda handed me a pair of comfy socks to test out while I was trying on shoes, and led me over to the benches where I would meet Marcus. Marcus, like everyone else, was incredibly friendly and had a penchant for singing Barry White. He adeptly grabbed a few pairs of shoes, inserted my custom insoles, and had me try them on. I started with a pair of Brooks, which did feel fairly comfy, but not “right” (says the girl who’s never owned real running shoes before). Next he had me try on a pair of Asics, which felt great when I was sitting on my butt on the bench, but were not to my liking when I actually stood up.

Not a problem at all for Marcus! He brought out a pair of Sauconys, and while I didn’t feel like these were “the ones”, it was a vast improvement from the previous pair. They had a lot of cushion in the ball of the foot, which I liked. The floor of the store is concrete, but you’d never be able to tell with these shoes on. Marcus, not satisfied with my response to those, brought out yet a third pair, promising more cushion than the pair I had on. I slid the new shoes on, laced them and stood up. It was like walking on a cloud! I said as much, and the woman next to me who was also being helped by Marcus, asked him to grab her a pair, too! (She bought them!)

Marcus was satisfied with my happiness with my Sauconys (Triumph ISO), so we wrapped things up and checked out, grabbing two packs of cushy running socks as well! I checked out, parted ways with Marcus, and left with a smile on my face. All in all, it wasn’t terribly costly, either! Running shoes generally last between 300-500 running miles. Since I don’t plan on running more than a 5K at a time, and at that, no more than 3X a week, that’s fewer than 10 miles a week, giving me between 30-50 weeks, or about a year. The insoles are supposed to last 1,000 miles, so I won’t need to replace them for quite a bit longer. And socks? Well, socks aren’t really that expensive. I definitely spent less today than it would cost me to join Planet Fitness with their Black Card membership for the same period of time. (Do the math yourself!) And, having good running shoes will definitely help prevent injuries in the future. And since I have two, maybe three 5Ks in my future, I need to take good care of my feet, right?!

All in all, my experience at Road Runner Sports today was extremely positive! Maybe next I’ll get lucky and win a free pair at the next Adventure Run in August.

So what did you do over YOUR weekend?

4 Comments on “A Running Shoe Noob Buys Her First Pair”

What do you do with leftover chocolate covered strawberries your super sweet (and handsome) guy got you for Valentine's Day? You eat them for breakfast of course! I had mine alongside a ham, egg & cheese on 2-minute flax bread. Yum! #homemade #healthy #healthyfood #delicious #breakfast #foodblogger #foodisfuel #eatrealfood #ham #egg #cheese #breakfastsandwich #flaxmeal #chocolatecoveredstrawberries #thedayaftervalentines #romantic #bestboyfriendever
Moss. #nature #moss #closeup #photography #hiking