DISCLAIMER: Do not attempt this workout without being comfortable performing basic kettlebell moves with confidence. This is not a beginner’s workout, and I am not responsible for injuries resulting from attempts at performing this workout. Try at your own risk.

So I promised you all I’d work on designing my own kettlebell routine. I decided that since I have Mondays off from work I’d plan on using the new routine on a Monday, so I had extra time to get the hang of it. Plus Monday is the ladder workout, which is untimed, so I’d really be able to pay attention to form for the new moves. I’ve added four moves that I had not previously attempted in order to expand my repertoire and to challenge myself to get stronger. Here are the new moves, all of which require a firm understanding of basic kettlebell moves:

This is a deep squat performed by holding the kettlebell over your head in one hand. It’s great for your shoulders and core, and requires good squat form.

Great for buttocks, quads and mobility. Just like a regular side lunge but holding a kettlebell high on your chest.

Advanced version of a regular Clean. Master the regular Clean before attempting the One-Legged Clean. Activates the core and utilizes your balance as you stand on one leg.

You MUST master a regular kettlebell swing before attempting this exercise. Control is important to avoid slamming the kettlebell into your knees. Instead of swinging the bell between your legs and back to chest height, you’re swinging the bell from left to right, sort of like an elephant swings his trunk.

Armed with these new moves, plus some old standards, I plugged them into my Monday ladder workout format. I wanted to make sure that the one-sided moves got plugged into the odd-numbered spots, because this ensured that each of those moves would be repeated evenly on each side. Two-handed moves got the even-numbered spots. I also wanted to make sure that the easier moves were in the middle range of numbers, because I’d be repeating them, a lot. The moves that required more balancing were in the lower range, so I could focus on doing a few reps but repeated many sets, and that the more difficult moves were in the higher range so I would have fewer total sets. Complicated, right? No kidding! I managed to make it work, and here’s the result: 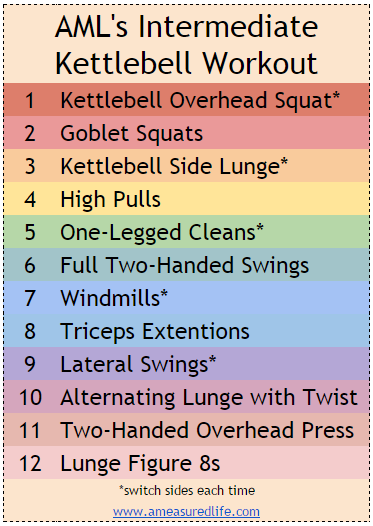 Now I’d like to comment that I did Fitness Blender’s Kettlebell ‘Til You Drop Friday morning, followed by running Friday evening, and sprints and stair running Saturday afternoon. When I woke up Sunday I was sore in places I didn’t know existed. Not bad sore, just your standard DOMS (Delayed-Onset Muscle Soreness), but it’s obvious that sprints and stair runs utilize muscle groups that I’ve neglected for some time. When I got up this morning I was still sore, particularly in my quadriceps, hamstrings and hip flexors. I popped a few Ibuprofen, drank some coffee and had a banana, printed out the routine and changed into my workout gear. I checked the temperature outside and decided that despite the relative coolness, the humidity was enough to keep me from working out on the terrace. Guess the family of ducks that likes to watch me work out will have to wait until next week!

I took my time and worked my way through the routine. I had to be extra careful during the early balancing moves, but found I really enjoy the Lateral Swings! I do need to pay attention to the swing to assure I don’t smash my knee caps but the movement felt very natural and freeing to me. I definitely felt the challenge of all the leg work, but as I progressed and warmed up the soreness became more background noise. I followed up the workout with abs:

Repeat x3 (but do 100 bicycle crunches for the last set)

In summary, this new workout was challenging without being impossible. The transitions between the moves was smooth, and I definitely felt like I worked my entire body from top to bottom today.

Did you workout today? Let me know in the comments!

4 thoughts on “Designing Your Own Kettlebell Workout – Part II”