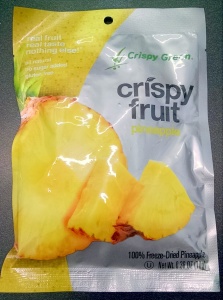 So I had to run to good old Acme this morning to buy some coffee for work, and while I don’t usually do impulse buys, particularly at Acme, because, hey, expensive. This little single serve packet of freeze dried pineapples cost me $1.49. Not terrible, but not great either. Each bag of dried pineapple has 35 calories and one ingredient: PINEAPPLES. Bonus.

I opened the package and took a whiff: smells like pineapples. Not the pungent sharpness of fresh pineapple but the softer, more subtle scent of canned pineapples, which hey, is fine, because canned pineapples are delicious! I poured a few out onto an envelope because I’m at wo

rk and we have no plates. (We have been known to eat pizza off of USPS flat rate boxes because we get them for free.) They certainly look like desiccated pineapples. Check.

Next up: the crispy test. I pop one of these fine little babies into my mouth. Definitely crunchy/crispy and truly tasted like pineapple! Sweet, but not sickly sweet like regular pineapple that’s dried with sugar. I would say these would definitely do the trick for someone who wanted a piece of candy without the calories.

So, would I buy these again? Probably, but not often. Mostly it’s the price point. I would probably buy these if I could get them on sale for less than a buck. But definitely tasty and worth a try!

Have you tried these? I’ve also tried the Asian pear ones but they were not as tasty.