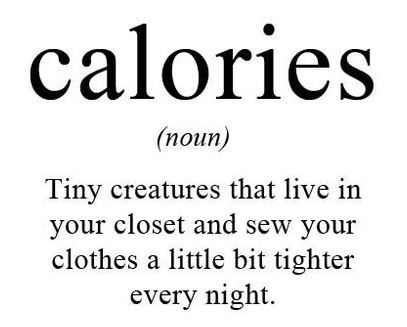 By now, you’ve hopefully cut out most of your drinkable calories and replaced them with water, and you’ve started tracking your food, or at least what you’re currently eating. There’s probably been some weight loss over time, but it might not be what you hoped for. This put me in May 2012 and 249 lbs. That’s right, in my first month on SparkPeople, I “only” lost 3 lbs. But remember, I had barely made any changes so far and I still lost weight. So what next?

You may have already noticed that this is a bit of a numbers game. Unfortunately, weight loss isn’t addition and subtraction. It isn’t even algebra (I’m not 100% sure on this but I’m assuming it uses mostly Greek letters): it’s way more complicated than that. But the best part is that you don’t need to know all the factors to be successful, you just need to pay attention to yourself. Yes, you heard me, I’m giving you permission to be self-centered when it comes to weight loss! In fact, paying attention to your habits and your body may be the most important aspect of it all, particularly if you’re a woman.

As most people know, women’s hormones fluctuate throughout her menstrual cycle. This can lead to changes in levels of hunger, cravings, and dropping energy levels. It can also make the scale be your enemy, unless you know your body. Who better for me to use as an example but myself? (I mean, who else could I use that I know better than I know me, right?)

TMI WARNING: If you don’t like discussing female reproductive cycles then skip the section between the horizontal lines!

When I was severely overweight, I was seriously irregular. It was a big old mystery as to when TOM would arrive, and then I’d spend 2 or 3 days in a panic hoping my clothes didn’t get ruined from the sheer quantity of it all. I’d always been one of those lucky girls whose cramps were tolerable, but the whole event wiped me out with exhaustion. After a while I decided to go on birth control just to tame the beast. This helped for the most part, but came with a whole slew of side effects like enhanced mood swings and elevated blood pressure. YAY.

Once I started losing weight, things started to stabilize a bit, and I was able to go off birth control pills. (At this point my blood pressure dropped to low-normal!) It was at this point that I started really paying attention to how I felt during specific portions of the month. I tracked my cycle on MonthlyInfo.com (it’s FREE) and weighed myself daily. Lo and behold, a pattern emerged! Unlike what I’d always heard from discussions on family sitcoms, where the woman was always a raging bitch DURING her period and bloated like crazy, I bloat during OVULATION. (Oh hey, you mean all those jokes I heard growing up were WRONG!?) My weight is always highest the week surrounding ovulation, and I always hit my “low” weight a day or two before my period started. Since I tracked my weight on SparkPeople only when I had a drop, I could plainly see the pattern. No loss, no loss, no loss, drop, drop, drop, then next month the same thing, no loss, no loss, no loss, drop, drop, drop. This went on for more than a year! It helped me realize that I didn’t have to panic about a gain (or lack of loss) for most of the month, because the weight would come off when it was ready.

So back to the numbers game. You know how many calories you’re consuming, but you don’t know how many you need to eat to lose weight, right? Well this part is easy: if you want to lose a pound a week on average, you’ll need to cut back on 3,500 calories a week. Sounds like a lot when you put it down like that, but if you divide up into days, that’s 500 calories a day. This is called a ‘deficit’. You can achieve your deficit by cutting calories or exercising, or, better yet, by doing BOTH! Today, however, I’m just going to focus on eating at a deficit, since that’s what I did. Now, if you drop that 500 calories suddenly, your body is going to FREAK OUT! You’re going to want to gnaw your arm off with hunger, particularly if you haven’t yet changed from eating frozen french fries and fish sticks like I used to do. Start slow: cut 100 calories from your daily calorie allotment at a time, and when you’re comfortable with that amount, cut back a little more, until you reach your desired number.

SAFETY NOTE: Many websites out there will recommend women eat 1200 calories a day to lose weight. This is the ABSOLUTE MINIMUM your body needs to function, and unless you have a metabolic disorder, you shouldn’t ever need to eat this little to lose. I never ate below about 1500 calories, and that didn’t last long, because I was miserable. An easy rule of thumb is to take your goal weight (mine was 160) and multiply it by 10. If you use that general guideline you should be able to eat enough calories to get all your nutrients and you won’t ruin your metabolism by eating too little. But seriously, don’t go under 1200 for women and 1500 for men unless you are working with a doctor.

“So Andrea,” you say, “I’m used to eating filling, hearty stuff. I love meatloaf and mashed potatoes and mac and cheese and stuff!” Well, I have good news: you don’t have to give that stuff up. In fact, you have three, count ‘em, THREE options. You could a) continue to eat the same recipes but eat a smaller portion, b) adjust your favorite recipe to make it lighter and healthier so you can still eat it, c) eat it the way you’ve always eaten it but make it a special occasion food only. For example: I love pasta. Do me a favor. Go to your kitchen right now and read the package of a box of pasta. Go ahead, I’ll wait. A serving size of pasta is 2 ounces, right? A box of pasta is 8 servings!

That is a RIDICULOUSLY TINY PORTION OF PASTA! It looks really sad in even a small bowl. (Seriously, even now, after almost 2 years of eating a single portion of pasta, just looking at it makes me a little sad.) How do I bulk my pasta so it feels satisfying? Veggies! (And maybe a little meat.) One of my favorite ways to eat pasta during the summer months is to brown the meat from two Italian sausage links, then cook chopped onions and asparagus in the fat, and toss in the pasta. The onions and asparagus bulk up the pasta and it looks like a normal sized meal, but the veggies don’t add a lot of calories.

Continue making little changes. If you only cook at home a few nights a week, cut back on eating out. Often times you’re paying triple the cost by eating out, and eating triple the calories!

Manage portion sizes. A portion of cooked lean meat is 3 oz. This is where that kitchen scale comes in handy! Note: just because you know the portion size doesn’t mean you have to EAT the portion size. A portion of cooked white rice is 1 cup, but I can never eat that much, so I eat a half cup. And I measure it out every time to make sure I’m getting the right amount. This may *seem* like extra work, but you have to spoon the rice out of the pot anyway, right? Just use a measuring cup to serve instead of a spoon. Problem solved, one less utensil to wash! (Want a great guide for eyeballing portion sizes? Check out http://blog.photocalorie.com/portion-sizes/ )

Measure. When cooking, measure the ingredients before adding them to the pot, particularly cooking fats. If a recipe calls for 1 tablespoon of olive oil, measure one tablespoon of olive oil! It’s really easy to overdo it with cooking oil because it spreads out as soon as it hits the pan so it’s very hard to eyeball. Note: I used to go through olive oil like it’s going out of style. Now that I measure it, it lasts forever!

Adjust your recipes. If a soup recipe calls for ¼ cup of olive oil, cut it in half. If the soup tastes awful (it won’t) you can always make it the regular way next time (you won’t.) This doesn’t apply to baking, where the ratios of fats to dry ingredients is very important, but in soups, stews and stir frys you shouldn’t have any problem cutting back on fat. Just don’t try to make everything fat free, the fat free diet ship sailed many moons ago, young padawan. (How’s that for mixed metaphors?!)

Leave the leftovers in the kitchen. This is HUGE for me. I portion out my plate and a plate for The Hubs, and I pack the two lunch containers BEFORE sitting down to eat. That way the leftovers are out of sight out of mind. I eat what’s on my plate, and that’s it. I’m a bit of a grazer, so if there is food sitting in front of me, I’ll pick at it. This a danger for me, so I leave it in the kitchen.

Eat slower. This is a skill I have not yet learned. I’m working on it, though! Pay attention to the food as you put it in your mouth. Smell it, taste it, feel the texture. Can you taste the various ingredients as you chew? How full are you? Could you stop eating right now and be satisfied? On a positive note, if The Hubs finishes eating before me, I know he really liked the food.

Be mindful. If you think you want a snack, really think about. Are you hungry, or just craving something? Are you upset? Bored? Thirsty? Hormonal? I am, without a doubt, a boredom eater. If I’m upset, I have no appetite. If I’m angry, watch out, because I’ll clean circles around you! But leave me to my own devices on an evening with nothing to do? I’ll snack, and snack, and snack. Which one are you?

Use Smart Swaps. What are smart swaps? A smart swamp means switching out one food for a similar food with fewer calories. Here are some of my favorites:

Miss the beginning of the series? Go back to Part I and Part II.

So, do you, my dear readers, have any awesome smart swaps to share?

6 thoughts on “How to Lose 100 Lbs Without Losing Your Mind or Breaking the Bank: Part III – Cutting Back”